– for Cation-Exchange of Peptides-

This strong cation-exchange (SCX) material was developed specifically for HPLC of peptides. At pH 2.7-3.0, peptides lose their (-) charges and have net (+) charge. Thus,PolySULFOETHYL A™ is a general-purpose alternative to reversed-phase (RPC), fractionating peptides by differences in charge rather than polarity. Compared to other SCX materials based on sulfopropyl- (SP-) groups, PolySULFOETHYL A™ is unusually hydrophilic. This minimizes hydrophobic interactions with peptides, with high recovery and less peak tailing. Capacity is also high, permitting better retention and fractionation of the weakly basic peptides from tryptic digests. The capacity of an ion-exchange material like this is 4x that of a comparable RPC column. Therefore, ion-exchange should be the initial step of a multi-step purification. Use PolySULFOETHYL A™ for:

1) Multidimensional HPLC of peptide mixtures, such as tryptic
digests in proteomics analyses (including iTRAQ® and ICAT®* reaction products).

2) Isolation of peptides from natural products.

3) QC and purification of synthetic peptides.

Proteins can be run on PolySULFOETHYL A™ columns too; at pH 3, retention is all but guaranteed. An example is the analysis of Lung Surfactant Protein on a PolySULFOETHYL A column operated in the Hydrophilic Interaction (HILIC) mode.

Standard material for peptide applications is 300-Å, in either 3- or 5-µm. The 200-Å material has about 25% greater capacity and is preferred for phosphopeptide isolation and fractionation of iTRAQ® reaction mixtures. For proteins, use 1000-Å material or the 3-µm, 1500-Å material.

ERLIC is a new mode of chromatography that permits some separations to be done isocratically that normally would require a gradient. It also permits the selective isolation of phosphopeptides from a tryptic digest. In ERLIC, the column is of the same charge as the sample solutes. The mobile phase contains enough organic solvent so that hydrophilic interaction keeps the solutes on the column despite the electrostatic repulsion. The pH of the mobile phase is selected to insure that the solutes do have the same charge as the column. When the best-retained solutes in a mixture are highly charged, this combination can be used to selectively antagonize their retention. 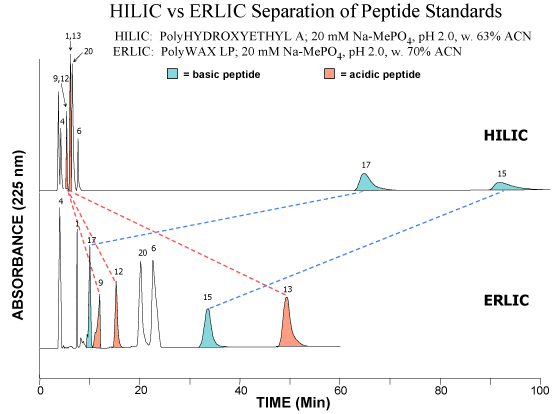 The following example shows the separation of nucleotides on PolySULFOETHYL A™. Normally the NTP’s elute much later than the NMP’s and NDP’s in either the anion-exchange or HILIC mode. In ERLIC they elute isocratically in the same time frame as the other nucleotides. 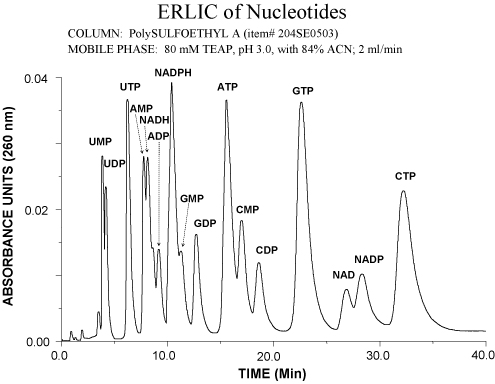 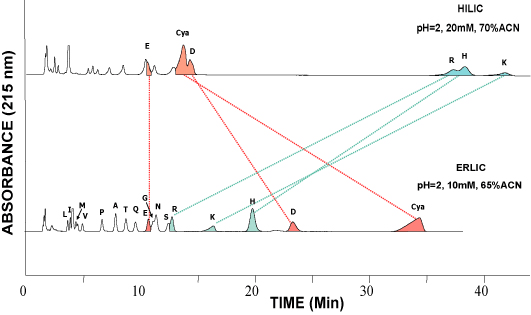 ERLIC of peptides is normally performed with a PolyWAX LP™ column at a pH ~ 2.0, low enough to uncharge carboxyl- groups in peptides. Under these conditions, phosphate groups retain their negative charge and are electrostatically attracted to the column. This attraction is not sufficient to overcome the electrostatic repulsion from the two basic groups in a typical tryptic peptide (the N-terminus and the Lys- or Arg- residue at the C-terminus), which is why anion-exchange has not been used for selective isolation of phosphopeptides from tryptic digests. Phosphate groups are quite hydrophilic, though. In the ERLIC mode the combination of electrostatic attraction and hydrophilic interaction does suffice to pull phosphopeptides away from the nonphosphorylated peptides in a tryptic digest. This is clear from the following example, which contrasts retention of tryptic peptides from beta-casein on the same column in the ERLIC mode and in the anion-exchange mode. 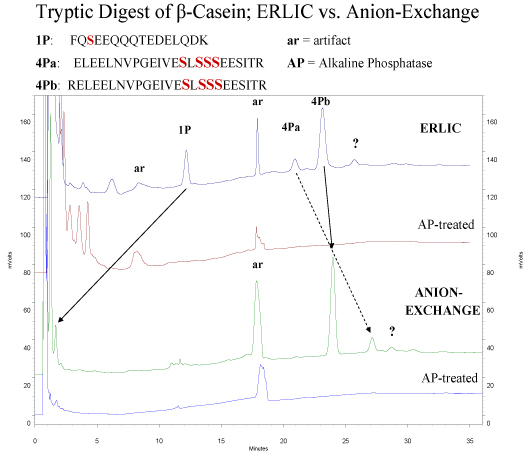 1) Low-salt fraction: HyperCarb retains ~ 50% more phosphopeptides than does C-18, and appreciably less nonphosphopeptides.
2) High-salt fraction: C-18 retains more peptides of all kinds, phosphorylated and nonphosphorylated.
3) The peptides in the late-eluting fraction tend to have 2 or 3 phosphate groups. The peptide sequences displayed are reasonably characteristic of the types of peptides observed in the fractions in question.
4) Neither material captured all of the phosphopeptides that were retained by the other material in either case, although there was considerable overlap.

Order Information will be updated soon……!

Support will be updated soon…..!