PolyCAT A™ is made through a unique process for attaching poly(aspartic acid) covalently to silica. Proteins elute from this polypeptide coating in sharp peaks with little tailing. Binding capacity and recovery are high as well. Use PolyCAT A™ for:

Since PolyCAT A™ is a weak cation-exchange (WCX) material, it is used at pH values above 4. A gradient to unbuffered acetic acid will uncharge PolyCAT A™, permitting the elution of proteins in a volatile solvent. See our poster on this subject.

Peptides can be run on PolyCAT A™ if they contain at least two excess positive charges above pH 4. More weakly basic peptides, such as tryptic fragments, are not reliably retained and should be run on PolySULFOETHYL A™ at pH = 2.7 – 3.0

For proteins larger than 20 KDa, we recommend the use of pore diameters of at least 1000 Å for optimal selectivity and efficiency. Our 3-µm material with 1000- or 1500-Å pores is the finest cation-exchanger available for protein separations

Proteins synthesized by the biotech industry for injectable pharmaceuticals are never 100% pure (the FDA requires purity of at least 98%). There may be side products from the synthesis or the protein may degrade in storage. At this time the most effective material for analyzing such mixtures is PolyCAT A™ with a particle size of 3µm and pore diameter of 1000-1500Å.
Order PolyCAT A™ now.

Degradation in storage: At high pH, the most common such reaction is deamidation of asparagine residues to yield a succinimide ring; this hydrolyzes to a racemic mixture of Asp- and isoAsp- residues. At neutral or acidic pH, the fastest reaction is dehydration of aspartic acid residues to yield the same succinimide intermediate and the same hydrolysis products (one of which is identical to the starting material). The effects on biological activity range from negligible to serious. In the past, degradation was assessed by protein digestion and peptide mapping. However, our columns, especially PolyCAT A™, can resolve many intact proteins differing by a single residue. The following figure shows the difference in the degradation pattern of recombinant human growth hormone (HGH) incubated at two different pH’s. The desPhe-Pro variant, a nonenzymatic cleavage product, is well separated from HGH, as are its corresponding variants. Such studiest are critical to determining which pH yields the most stable formulation. 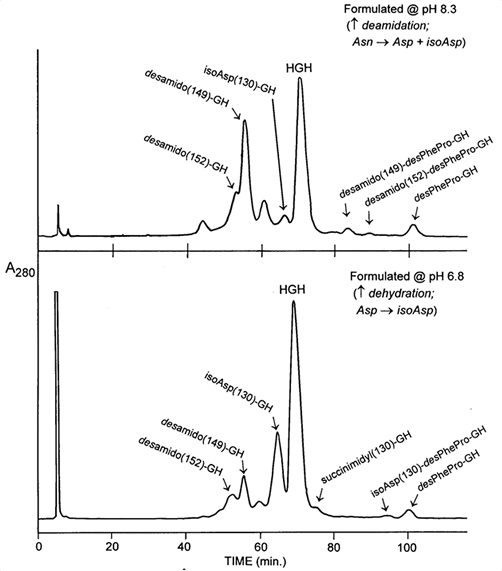 Side products from synthesis: The chromatogram for BMP-14 has several minor peaks eluting prior to the main peak. These are more apparent in the blown-up view below. Peaks in this location are generally deamidation variants. Peaks to the right of the main peak are generally oxidation variants or have disulfide bridges connecting the wrong residues. This chromatogram is typical of recombinant proteins in the TGF-beta family and growth factors in general 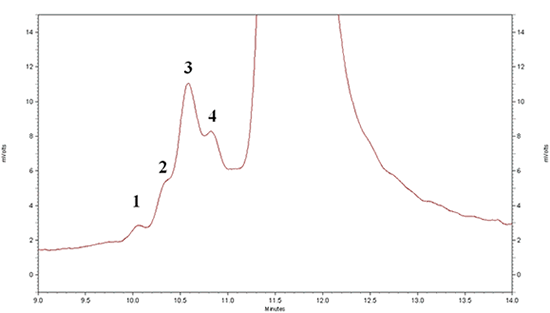 Positional variants: Some proteins are derivatized with polyethylene glycol (PEGylation) to retard their catabolism, prolonging their longevity in circulation. PEG is usually attached to the -SH group in cysteine or an amino group in lysine or at the N-terminus. However, a protein may have more than one -SH or amino group, and a number of products can result that are derivatized to the same extent but at different positions. The example below involves a neurotrophic factor. The main product has a PEG chain on the N-terminus, while the nearby minor variants have PEG chains attached to different Lys- residues. These variants differ dramatically in biological activity. 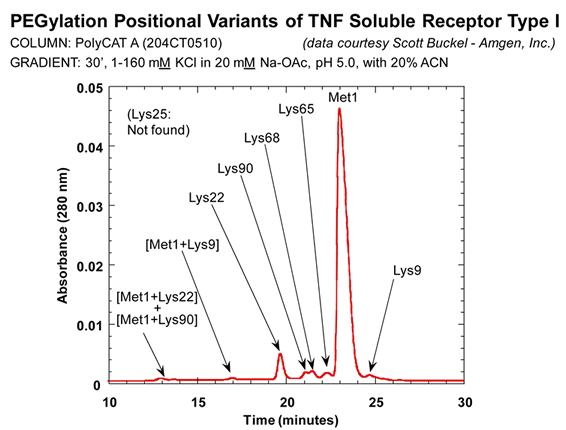 Monoclonal antibodies: The C-terminal residue of the heavy chains is always a Lys- or Arg- residue. Loss of one of these basic residues leads to earlier elution in cation-exchange, while loss of both basic residues leads to an even earlier-eluting peak. The three-peak pattern seen below is characteristic of monoclonal antibodies. The minor peaks are due to deamidation, oxidation, loss of sialic acid residues from carbohydrate side chains, or disulfide bridges with the wrong connections. 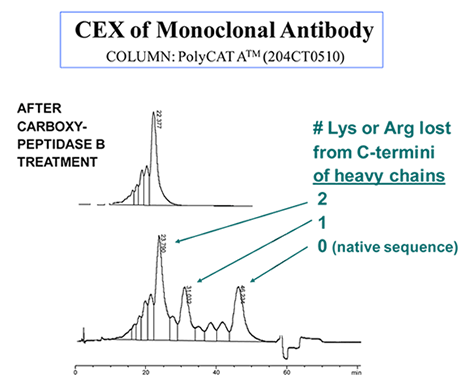 Synthetic polypeptides: These too can experience deamidation and dehydration, in addition to missing residues and nonenzymatic cleavage. The selectivity of ion-exchange HPLC nicely complements that of reversed-phase (RPC), often resolving variants that coelute in RPC. The example below shows the analysis of pramlintide® in an accelerated heat stress test. Pramlintide is a synthetic analog of the pancreatic peptide amylin, which complements the action of insulin in regulating the metabolism of glucose. Pramlintide’s sequence is given below in the figure.
All asparagine residues are potential deamidation sites. In this severely degraded sample, a deamidation product was observed for each such site except for Asn31. 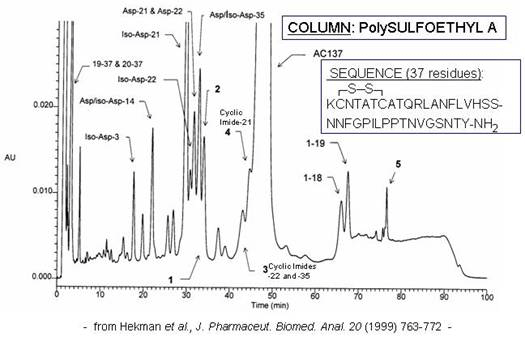 Order Information will be updated soon……!

Support will be updated soon…..!